Confessions of a Beginning Pipe Major - A Short Series

This has been an interesting four years, starting with my taking over as Pipe Major of the Silver Thistle Pipes & Drums after our last trip to the World Pipe Band Championships (“the Worlds” in Glasgow, Scotland in 2011 and culminating in our latest run to the Worlds last week. For my non-piping friends, the Pipe Major of a pipe band is, in short, responsible for the musical product that the band puts on the field. The reality, I have since found, is much more intense. The Pipe Major is part band director, part musical writer/arranger, part teacher, part project manager, part drill sergeant, part psychologist, part street beggar, part band mom, and a HUGE part cat-herder. I also get to play the pipes once in a while.

Of course, having been asked to take over the band back in 2011, all I could think of was how many ideas I had and how I could implement them the quickest. I was excited about the prospect of leading the band to victory after victory on the field, with everyone gleefully accepting my latest and greatest plan. Boy was I in for a rude awakening! Don’t get me wrong, it has been a great four years that I wouldn’t change for the world. But if I knew then the challenges that were ahead, I’m not sure what my reaction would have been. I certainly would have given it much more thought!

So, all that having been said, I wanted to put some words to paper and recount the triumphs and tragedies of my first four years as Silver Thistle’s latest P/M. I think that this is as much for me to sort out my feelings and lessons learned as it is to encourage (and warn!) any aspiring P/M’s out there ready to start their own band. 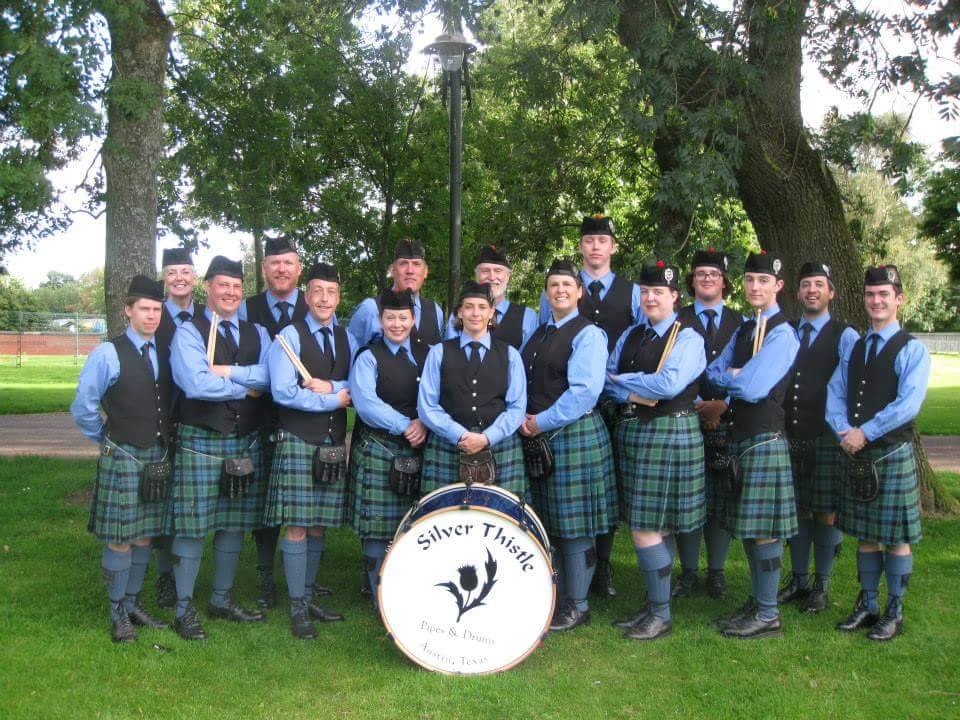 Pipe bands typically live and die by their numbers. For a typical Grade 3 band you are required to have 6 pipers, 2 snares, 1 tenor drum and one bass drum. This can vary depending on which of the alphabet soup of governing associations under which you are competing. If you compete in Texas or the Eastern US, competition usually falls under the Eastern US Pipe Band Association (EUSPBA). Competitions in the UK (Scotland) fall under the Royal Scottish Pipe Band Association (RSPBA). Each association has its own requirements and idiosyncrasies.

Back in 2011, this was certainly no problem for us! We were fielding both Grade 3 and Grade 4 bands at the time. Our Grade 3 band travelled to Scotland that year with 12 pipers, 5 snares, 4 tenors and a bass. Not a bad size! Unfortunately, when the post-Scotland doldrums hit, we lost all of our Grade 3 snares, three of our Grade 3 tenors, and all but two of our Grade 4 pipers. Yikes! I was now left in charge if the remnants of two bands and not able to field a full band of either grade! Solution? Improvise!

(Note: these things tend to happen in cycles due to “rehearsal fatigue” from the run up to the Worlds, as well as the regular changes in life for players like college graduation, moving for jobs, chasing girls half way across the country, etc. This is the life of a volunteer organization.)

We competed the following year by doubling up players to fill out the Grade 4 drum corps. Two of our Grade 3 pipers volunteered to play tenor for the Grade 4 band. Luckily, we also had a couple of new players fill our drum corps. For Grade 3, we basically muddled on by going to competitions with our Grade 4 band and “competing” in front of the judges for comment sheets only in Grade 3. Let me tell you this now: there is nothing more frustrating than for a judge to write on a score sheet that “you have a Grade 2 pipe corps! Excellent! Now find some drummers!” Ugh!

Then about a year ago, knowing that we wanted to go back to Scotland to compete in the Worlds, we made a momentous decision. We would combine the two bands into one and compete at Grade 3! I get the feeling that there was much trepidation from our Grade 4 pipers and drummers, but they gutted it out. They took their licks, but kept working at it and have improved immensely! I’m very proud of them. This year, we competed at the Worlds with 10 pipers, 4 snares, 2 tenors and a bass. And sounded good!

By the way: If you play the drums and live in, or can move or travel to Austin, give us a shout! That will prevent me from having to take my cudgel to the next highland games to shanghai some more drummers!

Next Episode: The Music and the Never Ending Fight for Attendance

Oops, you forgot something.

The words you entered did not match the given text. Please try again.

Reply lasilix where to buy non precription
9:44 PM on September 17, 2021
When Will Alli Be Back In Stock